I’d like to thank Jordan for his detailed, thoughtful answers. His sense of humor and ability to make peace with events from the past really come through in this interview.

Also, I’m not sure what’s up with Tennessee, but this is the third interview from TN out of the eight I’ve done so far. The edge is strong with the Volunteer State. 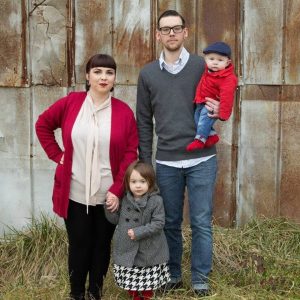 Jordan with his family looking dapper.

Number and ages of children: I have one daughter, Nora, who will turn 3 in February and one son, Oliver, who is 8 months old. My wife and I are also expecting our third child (another boy) in June.

Location: I reside in Johnson City, TN. NASCAR fans know where Bristol Motor Speedway is, college football fans will know where the University of Tennessee is, and I’m stuck between the two.

Profession: I currently work for the United States Government under the Department of Veterans Affairs– Veterans’ Health Administration. I work as a medical support assistant in the primary care department.

I’m also involved with the American Federal Government Employee union as a steward/representative and legislative assistant. However, I’m attending school to complete my Masters of Business Administration and working toward my Lean and Six Sigma Black Belt certifications.

As far as doing stuff with my kids, obviously Oliver is too little to do a lot but I just love watching him smile, laugh, and get excited over his sister tickling him. Nora likes to be outside so we spend a lot of time at the park and playground when it’s warm enough. She also likes to get on my skateboard and will ask to go to the skate park sometimes. We listen to records together, watch movies (I can probably recite the scripts for Frozen and Wizard of Oz), and she likes to help me do anything that I’m doing.

Jordan explaining the difference between goofy and regular foot.

2. What pieces of art, music, literature, etc., inspire you at this stage in your life?

I don’t get to read a lot, when I do it’s usually for school or work-related material. Music is really my means of inspiration/motivation. I listen to a little bit of everything but Mindset’s album “Leave No Doubt” has been on heavy rotation since it came out. I have some friends who play in bands or have their own company so it’s always inspiring to see my friends having fun and doing what they love.

3. What does being a good father mean to you?

My wife understands and thinks it’s good for our children to grow up in that environment. She will occasionally enjoy wine when we go out to eat but that’s as far as that goes for her. She’s very understanding of my reasons for being drug-free and how much this choice has impacted my life, as well as some of my friends’ lives. Of course, my mom and step-dad think it’s great. My biological father doesn’t have much to say about anything with regards to myself but I would assume his thoughts are along the lines of “Well, that’s good.” Many of my friends aren’t straight edge but they all have respect for my choice and don’t blow smoke in my face or bring substances around my family.

5. Why did you decide to be drug and alcohol-free as a father (or beforehand)? Are there other major life choices that complement your decision?

I found out about straight edge when I was 17 working at a hotel. One of the dishwashers who are now a well-known tattoo artist would always wear band shirts and had X’s tattooed on his elbows. I approached him and asked why he had X’s on his elbows and he explained to me what it meant. The next day, he had a cd loaded with hardcore bands that were/are straight edge (Minor Threat, Earth Crisis, Judge, etc.) and it made sense to me. It’s how I wanted to live my life so I made that commitment. Full speed ahead since then.

This couple has style.

I’ve witnessed the devastation of alcohol abuse and drug abuse. I had a friend who begged for me to help him get into rehab. He overdosed (and died) 2 days before he was being admitted, but I remember how hurt and angry he was at himself for letting it get that far. My grandmother died due to complications of emphysema, onset by smoking cigarettes. It’s not something that I wish upon anyone to go through. I see how a lot of people are suffering due to substance abuse and I want my children to understand why they are suffering but also understand what avenues of help that can be met in case they grow older and have friends or a spouse that needs helps to overcome addiction.

6. How do your experiences as a son influence your choices as a father when it comes to drugs and alcohol?

As far as I know, my parents never dabbled in drugs. I know there were two instances where I jerked a cigarette out of my mom’s mouth and threw it out of the car window when I was little and poured a 6 pack of beer down the drain so she couldn’t drink it. That was around the same time that my grandmother was diagnosed and given reasons why she had health problems related to smoking. I was about 8 or 9 at the time. Maybe that was a precursor to age 17. Other than that, as a son, I didn’t have to deal with drugs or alcohol.

Most of my experiences were from friends or parents of friends when I was growing up. I had a friend whose dad was an alcoholic and I refused to go to his house. I didn’t want to be in that environment so I always asked my friend to come over. It was like I was allowing him to escape for a few hours and not worry about being yelled at or beaten. I never had any desire to give that a try. It was set in my mind that early that drinking would lead to that.

7. As a son, what is something you would you like your dad (or mom) to know?

To my mom and step-dad: Thanks for always being there and supporting me. Even if it ended in my learning a hard lesson. Thanks for being there for your grandchildren. Whether you realize it or not, skateboarding and my insane music kept me focused in school and out of trouble so thanks for dealing with that and the hundreds of dollars spent on new shoes every 3-4 months or a new deck when I needed it. I may not say it all the time but I am very grateful and love you both.

Nora already throws her arms into an X and says “straight edge” which is funny. If we see someone on a movie smoking, I try to tell her it’s yucky and hurts them. She’s starting to pick that up. As they get older, my wife and I have agreed to have as much of an open communication with them as we can. The schools around here still do the D.A.R.E. presentations and stuff but we’re going to move forward with that at home a little more in-depth. I knew more about drugs than most of the junkies in high school because I wanted to know what was going on. Maybe one of my kids will be the same way and see all of the problems that drugs and alcohol bring. Of course, it’s going to be the whole “don’t do drug, drugs are bad MMMKAY” kind of talks but I want to explain on WHY and help them understand how society is creating a culture that is insensitive to substance abuse. I keep saying “I hope” and “Hopefully” because they are so young but I do hope that this open line of communication and understanding will translate into them talking to their friends. If I find out that one of their friends brought drugs to the house or took them on a deal or anything like that, I honestly don’t know what I will do. Probably get the parents and authorities involved because the kid needs help, but they will never see the inside of my house again.

9. How does religion, political ideology, or other philosophies play a part in your choices as a father?

I try to stay away from politics and religion. I don’t go to church or anything like that so my children aren’t around that environment. I do have books on various religions and philosophies which will be available to the kids as they get older to do their own research and make their own choices on religion.

Political stuff is a gray area for me. I work with some legislation but it’s how the bills affect federal employees and labor laws. Other than that, I don’t partake in politics or political issues.

10. If you drank/used drugs, how will you address your past with your child(ren)?

I don’t worry about that. It’s not going to happen.

11. What pitfalls exist for drug-free fathers? How successful have you felt at overcoming them?

There are no real “pitfalls”, in my opinion. A lot of former and current co-workers respect my choice of this; my friends and family understand and respect it. I get invited to stuff like Super bowl parties (even though I couldn’t care less about football) or New Year’s parties where I know drinking will be taking place. I go to some and have no issues. I don’t go to bars unless a band that I want to see is playing, or to support a friend’s band. I have anxiety issues and a low tolerance for drunk, obnoxious people so big festivals aren’t really my thing. I don’t let my disdain for drinking or drugs influence going to see a band or anything like that. Bonnaroo wouldn’t be a good place for me but that goes back to the aforementioned reasons. These “pitfalls” are really a matter of preference on an individual basis.

I have no problem passing a drug screen so jobs have come pretty easy.

12. What are your greatest hopes for your child(ren)?

I just want my kids to be happy and know that they are loved without any doubts. I hope that they find something that they love and make a career out of it rather than working a job that they drag themselves to every day. I’ll support their decisions of entering college, military, moving to another country, etc. but my main hopes are that they are healthy and happy.