It’s pretty awesome to see dads that are still involved in attending, playing, and setting up shows. Nick Anchorheart finds time to do this in the Santa Cruz area while still working in the home care field, being present for his kids, and reading some good books (Hunter S Thompson, Ender’s Game and The Outsiders- all excellent choices). For me, it’s nice to see there’s another dad who followed the Metallica-GNR-Nirvana track into punk and hardcore. After all, none of us were born in the middle of a circle pit. There are some interesting quirks in this interview that make Nick’s personality come through including the cadence of the responses, and the words he chooses to capitalize or refrain from capitalizing. I find it to be a fun and uplifting read. Enjoy…

Nick and the kids on an incognito grocery run

Number and ages of children: 2; 8yo daughter, 6yo son

My favorite drug and alcohol-free recreational outlet is music- playing shows and going to shows. 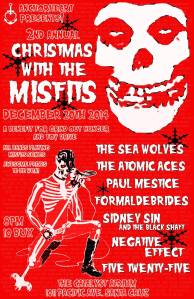 I’m heavily involved in not only the local 831 scene where I live, but being that I work for Numbskull Productions, I’m involved in the California Scene as well. But playing in my own band (The Sea Wolves) with my best friends is amazing!

I also enjoy working on my ’54 Chevy.

With my kids, just doing anything with them is awesome. Whether it’s play-doh time, or Barbies with my daughter, or Star Wars with my son. We play video games, paint, watch Netflix, and more. We always have a blast. They just both learned to ride bikes as well. And being that it’s summer time, outside activities are abundant.

2. What pieces of art, music, literature, etc., inspire you at this stage in your life?

I have a very eclectic music collection. Over a 800 CDs, 1500 records, and 500+tapes. Mostly rooted in Punk and Hardcore. And growing constantly. Every day is different for what I decide to listen to. But there’s always music playing. Even if it’s only in my head. Haha!

As far as Art goes, I’m into the classics. Van Gogh, Da Vinci. But I dig more modern hot rod and pin-up painters as well. Gil Elvgren, Roth, VonDutch, Sailor Jerry, Olivia, etc. And I have a few paintings by a current artist who does scenes with mid-century pop and film icons, Chris Consani.

This is a gorgeous automobile.

Also I’m a tattoo collector, so I love tattoo art, mostly American Traditional and Japanese. When I draw or paint its usually tattoo style art.

I love to read. I am usually always reading at least two books at once. But I have a full life, so sometimes it takes a while to get through books. Currently I’m reading Hell Angels by Hunter Thompson. And a book called The Wettest County in the World, by Matt Bondurant, that was made into a terrific movie, called Lawless. Nick Cave actually wrote the screen play for that I believe. I also love Stephen King and Dan Brown. Richard Laymon. Koontz. I loved Pop Kids by Davey Havok of AFI. And two of my favorite books are Enders Game and The Outsiders. I actually collect copies of both those titles.

3. What does being a good father mean to you?

Being a good father is everything to me. I am of the opposite opinion that kids should be seen and not heard. I want to be a part of everything my kids do. They’re just starting to get interested in music, and finding bands and artists they like, as well as showing more interest in bands I’ve shown em before. They dig the Clash and Misfits, The Gaslight Anthem, Bayside, Alkaline Trio. Ultimately being a good father means that my kids are happy and free to be happy in their day to day life. And I work hard to make sure that is the case.

My amazing wife fully supports my Straight Edge beliefs. I’m not sure why anyone would even not support someone’s choice to be drug-free though. We’ve been together 21 years and married for 14. Early on she also claimed SXE, but it only lasted a couple years for her as she realized she wanted to explore more of life’s “pleasures”. And I was always ok with her choices. She never got into drugs though, just cigarettes and alcohol. She has since quit smoking though, cause it’s unhealthy and for the kids. But she still enjoys the drink on occasions, parties, etc. with our other friends who drink.

My family supports my SXE life. Again it seems silly that someone would oppose it. I have four younger brothers, and two of them are also SXE. And in my band two of us are SXE, and two aren’t. There’s never been a conflict in any part of my life due to my belief to follow the Straight Edge lifestyle.

5. Why did you decide to be drug and alcohol-free as a father (or beforehand)? Are there other major life choices that complement your decision?

I discovered SXE around the same time I discovered Punk and Hardcore. I was about 14 or so. I had heard bands like The Misfits and The Clash, Ramones, Bad Religion, Black Flag, and others before then. But I didnt know the term Punk as a music genre. 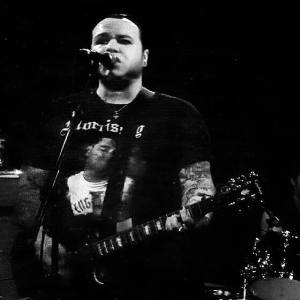 Nick with the Sea Wolves

When I was 8 I got a Walkman and two tapes for my birthday. GnR Appetite For Destruction and Metallica Ride The Lightning. So, fast aggressive music was already ingrained in me by the time I was 14. And by then I had moved on to bands like Nirvana.

When I was just about to enter high school, I got invited to a local Punk Show by some new friends. “What the hell is that?” I needed to know. It was local bands at the local VFW hall. And it was loud, and aggressive, and slam dancing, circle pits, and just awesome. And it was for me. I was in.

Nick suggests using a whiskey glass as the good lord intended- as a convenient way to hold your tea.

But coming from the more mainstream metal, and grunge stuff, I was exposed to older kids drinking, and smoking cigs, and of course Pot. I smoked pot a total of three times. Never had a cigarette or drank alcohol. It just wasn’t something I wanted to do. And my parents were of course bringing me up in a house where drugs and alcohol weren’t positive elements in life. So, when I discovered Straight Edge as a freshmen I pretty much adhered to it immediately. I liked the idea that I could be a part of this aggressive lifestyle. The music. The shows. And also not feel pressure to drink and do drugs. Though I was young and didn’t understand it totally. This was pre-Internet, remember. So I couldn’t just google it. I found my self smoking pot one more time when I was 16- the third and last time I ever did it. Even though before that I was already saying I was Straight Edge. That last time was one hit from a joint, and pointless. And I realized I didn’t need to do that ever again. Nor did I want to. And I have been Straight Edge now for 21 years.

6. How do your experiences as a son influence your choices as a father when it comes to drugs and alcohol?

There’s not too much from my childhood that directly reflect on me as a father as far as drug and alcohol use is concerned. My parents were of the 60s and 70s. My dad was in Viet Nam. And my mom was a Hippie. They drank beers at parties, bbqs, and with friends. Smoked cigarettes. And smoked pot. But none of those things ever took a priority to me or my brothers when we were kids. It was just something adults did. And kids didn’t.

Both my parents stopped drinking any alcohol over 15 years ago. And both have gone to e-cigs. And smoking pot stopped even longer ago then drinking. So my being a Straight Edge father came more from me just already being Straight Edge before I had kids.

7. As a son, what is something you would you like your dad (or mom) to know?

Well my parents are actually my neighbors. So there’s not much that I don’t get to tell then on a regular basis. But I’d wanna say thanks for showing me how to be a good person. For educating me on how to live a proper and happy life. And for always supporting me in my choices and endeavors.

They already know that beer and alcohol is something for adults. And so is smoking. They haven’t come to us with any questions yet. But when they do, or if I feel I should address the issue sooner, whichever comes first, I think it’ll be a fairly easy conversation. At least I hope so haha!

9. How do religion, political ideology, or other philosophies play a part in your choices as a father?

As a kid I went to catholic church. Went through communion. The whole thing. But it wasn’t an influence from my parents. They weren’t mega-religious. We said grace at dinner time, and my parents both believed in god. But that was about the extent of it. I was going to church with a family friend cause at the time, it was something to do.

By the time I was in high school I was pretty agnostic and against any form of organized religion. And now I’m pretty borderline atheist. My kids however both believe in god. Or what they believe to be god. Mostly influenced by their grandma. (My wife’s mom). She tells then things here and there. And teaches about Christ at Xmas time. But it’s not very deep. They’ll be allowed to grow up and believe what they feel like they wanna believe in. For now Santa and the Easter Bunny are still a belief in my kids hearts. So I figure after they go away, maybe we’ll take a look at the whole god thing.

As far as politics go, I’m usually pretty left. And more so towards being for the environment and nature. I grew up in a rural back country area, on a River. So keeping nature green has always been a standard and somethin we teach our kids as well. With other philosophies I got really into some of the eastern teachings, more studying and learning then following them. But through bands like Shelter I was exposed to the Krishna Consciousness. And I found it very interesting. 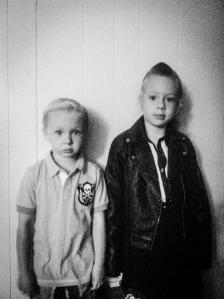 I also am really into Japanese culture and philosophies. One of my favorite books is Hagakure, the book of the Samurai. Written by Yamamoto Tsunetomo.

10. If you drank/used drugs, how will you address your past with your children?

I never drank. But I’ll tell em my experiences with marijuana. When the time comes.

11. What pitfalls exist for drug-free fathers? How successful have you felt at overcoming them?

I haven’t really experienced any pitfalls so to speak as a drug-free father. I’m not sure what there would be, since being drug-free is a pretty positive way to live.

12. What are your greatest hopes for your children?

Shortly after this interview was posted, Nick lost a good friend, Sammy Winston, to a house fire. Witnesses reported Winston as helping others escape the fire before his life was taken in the blaze. Nick has these words to say:

“I’d like to bid farewell to a brother in HC. Sammy Wintson passed this Saturday, 4th of July. He went out being a hero. He was the genuine article. Respectful beyond all. Always watched out for his own and anyone in need. A tough exterior and a tender heart. A true righteous hooligan. And he will be greatly missed. RIP Sammy. Stay Gold. #Outsiders”

A report on the fire from KTLA