Before leaving for this morning’s Quaker Friends Meeting,  I grabbed the nearest baseball cap. It turned out to be one I don’t remember wearing in the last several years. In fact, the last time I actually remember wearing this rather ugly silver Minnesota Twins hat was a spring day back in 2003.

I remember wearing it that day because a picture exists of me, a graduating friend, and one of my favorite professors. This professor, Jim Farrell, passed away in 2013. He taught us in a way that allowed him to fade back as the conversations he started eventually pulled more and more students into it. He was a spark and we were the fuel. 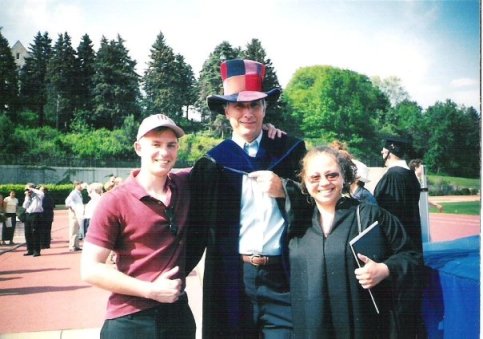 The spirit fed by his flame centered around awareness of the natural environment and its interplay with the cultural history of the United States. He was the instructor in my very first college class, The Nature of Culture and the Culture of Nature. I still have a vivid memory of walking into class, sitting in a circle with the rest of the class, and knowing that I was about to experience something new and special.

Because of Jim, I started attending St. Joan of Arc in Minneapolis, which was a block away from the apartment I was living in during the summer of 2002. I still love that radical Catholic community and would gladly start attending were I to return to the City of Lakes. Jim shared his faith in a way that called attention to our responsibility to each other and to the other inhabitants of the Earth. A sermon he gave at St. Olaf College in 2008 (3:30-17:00) allows a portal into his life and ideas. His talk regarding our “expressed and operative values” as they relate to the environment. I just discovered this sermon today. Interestingly, it was recorded this week, just prior to Earth Day.  Jim also left behind several books that he authored, only one of which I found on Amazon. I think the lightning rod that book seems to have become in the comments section would have intrigued Professor Farrell.

Jim loved what he did. By his example, we were encouraged to do what we loved while also caring for our natural and cultural communities. Taking the time for things we love is important. So is taking time to serve those around us, even if it’s in the form of work we don’t particularly enjoy at the moment. A podcast I listened to this morning mentioned how great artists of yesteryear spent a lot of time painting rich businessmen so that they could afford to spend a lot of their other time working on what they loved. I thought about this service-to-self/service-to-others balance quite a bit on my way to Quaker meeting this morning.

There’s a connection between our work lives and our home lives that is so huge and obvious that we often overlook it. How much life do I spend intentionally? How much do I squander? What does my example teach my children and students?  To paraphrase the Thoreau quote Jim used in the aforementioned sermon, The cost of something is measured in how much life I am willing to trade for its consumption or procurement.  I love the work I do, and I am blessed that way. But, I am also doing my best to restructure my life so that I am home and interacting with my family more than I have been in the past.

I was kind of chilled to hear Jim quote a Buckminster Fuller idea that I honestly just became aware of this weekend, “The best way to predict the future is to design it.” I have been trying to redesign my life by setting up a new schedule, learning new teaching techniques that are more progressive and kinesthetic, and by eating even more intentionally than I ever have- and I started cutting out meat in 1996, so food has been on my mind for a long time.

At the end of Quaker meeting, the last thing we discussed in our circle was being more intentional with our food. I was asked if, as a vegan, I’d consider eating meat grown in a laboratory. I said I’d really have to give that one some thought. Then I went on to talk about how much space and fuel we waste by having lawns. As I write this, it occurs to me that this was a concept I had never given any thought to until Jim had our Nature of Culture class read Grassland by Richard Manning.

On my way out of the Quaker meeting, I snapped a selfie with the cap. If a photo exists between 2003 and 2016 with me wearing that hat, I have yet to see it. The photo turned out a little blurry, much like the last time I was pictured in it. Which, come to think of it, also happened to be a on a college campus.

Ah, connections and coincidences. That’s what our stories are made of. Jim knew that well, and he did an excellent job of holding up mirrors to his students so that we could grow our ability to connect our greatest and smallest actions to the world around us.