My dad preparing vegan African food for a party before I left for a trip to Kenya and Tanzania.

My dad doesn’t suck. My dad helped me fix my lawnmower and set up two rain barrels today. My dad served his country for decades, busting his butt for the US Marine Corps and several Wisconsin public schools. Now, he trains schools, businesses, and other organizations how to keep safe during shooting attacks. He’s also cooked me countless gourmet meatless meals since I went vegetarian as a teenager.

But, lots of dads aren’t so great. Back in 1981, a little band called the Descendents released an EP that led off with a track about dads sucking. It’s a song that 30+ years of punk rock teenagers have probably been singing along to whole-heartedly (although, I admit to never taking the initiative to learn all the words, nor was it ever my favorite Descendents track- either in message or in musicality). In fact, I always thought it was pretty stupid.

I don’t know Milo Aukerman, but I do have several friends and acquaintances who do. And the last time they played Green Bay (1996), I was overwhelmed by their intensity and by the sheer volume of their musical library. The man and the band deserve their due. So, on this Father’s Day, I’m going to parse Milo’s* words and give them a serious reading. Perhaps his dad really did suck. Let’s do a little thought experiment and take a look lyric by lyric. It’s a three-stanza 40-second song, so this journey shouldn’t take too long.

[Stanza 1]
“Judgment time again, who’s on the shit list this time around?
Whose friends can we pick and tell them how to live?
Value judgement- hide! It’s a-comin’ our way.
He’s just a jerk himself, tryin’ to hurt his own.”

Well, now, Milo. Your dad has a list of people who neither meet nor exceed his expectations, and no one is safe? I wouldn’t say this puts him out of the norm of most human beings. Who isn’t safe from a list like that? The Pope? The President? Nope. No one. Everyone is on everyone else’s shit list at some point.
Milo 0 ; Dad 1

Second, it sounds like your dad picks on your friends and advise them to reflect on their foolish life choices. Again, whose dad doesn’t do this? I remember a time when my punk friends were over in our kitchen and my dad informed them that they looked like “a bunch of droopy-drawer wearing neo-Nazi skinheads.” Does it suck when dads do that? Yes. Does that make the dad himself suck? I don’t think so.
Milo 0; Dad 2

Third, when a value judgment is coming your way, you advise your friends and associates to hide. I don’t think this is particularly sage advice. For conflict-avoidant people like myself, it’s certainly easier. But, I don’t think it’s better. Perhaps this is our collective dads’ fault for not teaching us constructive approaches to conflict. Milo earns a point here, but only by default.
Milo 1; Dad 2

Fourth, is he really a jerk, “tryin to hurt his own”? Because if he is emotionally, physically, or sexually abusive, he does indeed suck. If it’s the last option, that would be an automatic do-not-get-out-of-jail card for any caregiver. My position is that those folks suck now and forever. Maybe I’m wrong, but I feel a special, unrelenting kind of disgust for people who harm children that way. On the other hand, perhaps he’s one of the former: emotionally or physically abusive. Yes, that sucks and he sucks. Perhaps he is working on getting some help for that and he’s going to work through it. Maybe he won’t always suck. I have seen fathers and children make amends after experiences with emotional and physical abuse.
I’m not sure, but I’ll give Milo the benefit of the doubt here.
Milo 2; Dad 2

[Stanza 2]
“He goes to the bar to get his girl.
But the rich he’s got ain’t what it’s worth
Says he need his little sexual push
Says two in the hand’s worth one in the bush.”

If he’s always at the bar when he is supposed to be spending time with his children, then he does indeed suck. However, it could also simply be that he’s a normal single dad looking for affection. Teenagers are typically so self-absorbed that they probably don’t think about what their fathers are doing when they’re not supposed to be spending time with their children. Therefore, I’m going to guess that Milo’s dad is leaving him at home during his “Milo nights” to go bar-hopping. When dads put drugs and alcohol above their children, they suck hard.
Milo 3; Dad 2

The rich he’s got…? I never understood that line. Someone else will need to explain it to me.
Milo 3; Dad 2

The final two lines of this stanza are not unusual. Human beings are complicated creatures who seek affection in myriad ways. Daddy is trying to get some lovin’, and also share his accumulated wisdom with his son, albeit via inappropriate phrasing. I suppose Milo would prefer to learn about the facts of life from TV and his friends, like the rest of the world. Not unusual, but not worth punishing dad over.
Milo 3; Dad 3

[Stanza 3]
“Because he’s just a pain in the ass,
He’s a thorn in my side.
Why can’t he leave me alone
Instead of running my life?”

Dads are supposed to be a PITA and a thorn in the side of an unruly teenager, right? Point Dad.
Milo 3; Dad 4

He shouldn’t leave you alone. Would you really want to have a lack of relationship with your own father? What’s going to happen when you need someone to help you fix your lawnmower and put together some rain barrels?
Milo 3; Dad 5

The twin scourges of helicopter and/or drill-sergeant parenting are real, and they leave children unprepared to face adulthood. I think you have a point here, Milo. It’s time to be assertive and tell dad just what responsibilities you would like handed over to you.
Milo 4; Dad 5

According to my calculations, Milo’s dad sucks, but only 44.4% of the time. I think that’s probably why, roughly 20 years later, the Descendents penned One More Day, a song that reflects on a complicated father-son relationship. The son watches his father die, while wishing for another 24 hours together. Now, that’s a song that moves me, almost to tears. 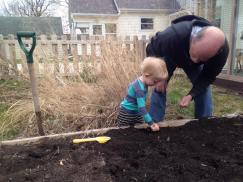 My dad doing some gardening with my oldest son

Most kids think their dads suck at some point. Dads are too conservative, too blow-hardy, too crude, too demanding, too critical, too aloof, too forgetful, too drunk, too stoned, too sober, too distant, too loud, too silent. In some cases, these are just normal generational conflicts or normal human flaws. In others, the dads really are sucking at their jobs, and they probably realize it.

I think the role of fatherhood is to protect, love, and provide for my family as best as I can. This means taking care of myself so that I can do these things. It means keeping up with my physical and mental health, which of course are no mean feats. It means doing my best to earn money, or grow food, or fix things at home that need fixing. It means putting the safety and health of my wife and children at the forefront. Do I always succeed? No. Sometimes I suck, too.

But, not usually. I’m a damn good dad. Like my father before me.

*Before any Descendents purists attack, I do know that Frank Navetta wrote My Dad Sucks and that Bill Stevenson wrote One More Day. But, Milo gave them voice. And his name is more fun to write. Read the stories behind both those songs here: http://noisecreep.com/descendents-bill-stevenson/