Every trip through Chicago starts with a visit to Mars Cheese Castle.

For the second time in two summers, my wife took charge of the kids while I hit the road for a concert. And this time, both kids were sick and my wife was recovering from a back injury and the illness she caught from our baby. If I didn’t know me, and I just read those sentences, I would be pretty disgusted with myself. Fortunately, I married Superwoman, and she encourages me to do things like go surfing or get together with friends. I need that, as I would probably spend my entire life at home or work if no one prodded me to do otherwise. 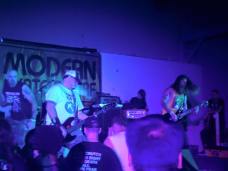 The show was on Saturday, July 18th at the Modern Skate and Surf Shop in Royal Oak, Michigan, a suburb of Detroit. The lineup was The Worst Of; Ante Up; Hellmouth; Homewrecker; Ricochet; and Earth Crisis. So, just like last summer, I drove many, many hours in large part to check out an Earth Crisis set.

Every band sounded really good, even with the interesting skatepark acoustics, and there was some pretty decent crowd movement during all the sets. I had never heard any of the opening acts, but I would check out any of them again if they rolled through Green Bay. To be honest, I missed Homewrecker’s set, as I was caught up talking fatherhood with some of the guys from Earth Crisis. To be a little more honest, a lot of that conversation was spent making wisecracks and telling goofy stories. As serious as those guys are onstage, it was jarring in a good way to see the joviality between the band and an old friend of theirs who happened to be temporarily working in Detroit.  It actually spoke directly to something Karl, their vocalist, mentioned on a recent podcast interview. 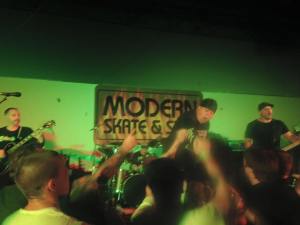 Earth Crisis and crowd, rocking the mic together

Earth Crisis played their entire 1995 Destroy The Machines album. The music and lyrics of that album made a huge impact on my life, so it was pretty awesome to be at one of a very few shows that they actually play the album in its entirety. There was a ton of crowd interaction during the set. Seeing them again, dancing a bit, and singing along was a totally cathartic experience for me.

Eric Scobie, who provided one of the first interviews for this website put me up. Eric, his wife and four boys were absolutely gracious hosts. Oddly enough, Eric is another vegetarian straight edge public school teacher, and his wife, like mine, is a teacher and birth doula. I enjoyed eating Sunday morning bagels and watching The Sandlot with them. Check out his scobonixxx blog and his band, Great Reversals. 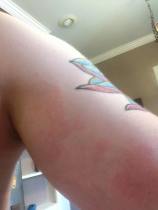 During the show on Saturday night, I started getting itchy on my arms. I figured it was my tattoos causing dry skin, as that has happened before. But, it turned out that I was beginning to have an allergic reaction and slowly being covered in hives and welts. It got so severe that I needed to go to the ER on Monday for an epinephrine shot, along with steroids and antihistamines on an IV. Looks like we’ll be meeting our deductible pretty quickly this financial year. 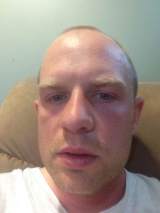 Steroids do wonders for my complexion.

While the steroids help keep my airways clear, they do carry some significant side effects. I’ve started freaking out about everything that moves in my peripheral vision. I get twitchy when people or our cats touch me. My face gets super red. I can’t sit still without becoming super anxious. And of course, there’s that little thing called Roid Rage. I’ve got it right now, and it’s a pain in the butt to everyone at my home. I’m hoping I can get over this crap pretty quickly and give my wife a day at the spa or something to make up for my several days of uselessness.

My wife looked up something called cholinergic curticaria which seems to explain some sunlight and exercise-related reactions I’ve had since I was a  kid. But, now our three-year old is coming down with hives, so we’re completely thrown off as to what is going on. I really wish I could do something to not pass my bizarre allergic reactions down to my kids. Not sure I have any control over that, though.