I love my work. I love to mix work with play. On my birthday, I spent a half day with my new colleagues at Leonardo da Vinci School for Gifted Learners. Following that, I did a phone interview with Scott Williams from the Green Bay Press-Gazette about some environmental work I’ve done with the Green Bay Wild Ones, and about an upcoming documentary called Hometown Habitat. The article was posted late that night.

Hometown Habitat is a project being developed by Catherine Zimmerman. She wrote a book and produced a corresponding film entitled Urban and Suburban Meadows. For over 30 years, she has produced documentaries, some of which have been feautured on CNN and New York Times Television. Her website, The Meadow Project has a tax-deductible donation campaign going for the new documentary. 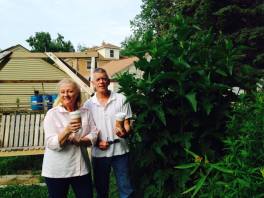 Fuel for the filmmakers

Catherine and her cameraman, Rick, rolled into Green Bay on Friday. We spent the day together shooting film with my friend and state assemblyman, Eric Genrich, who cosponsored some legislation promoting the use of native plants during the last session. We also spent some time at city hall with my friend and former colleague, Alderman Brian Danzinger. He has a quirky habit of referring to everyone in the formal manner. A habit which Catherine was unable to shake out of him.

After those two segments, Catherine and Rick shot an interview with me. Then they came over and got some nice footage with my sons and me in the back yard.

On Saturday, I met up with a group in De Pere, the city just south of Green Bay. A group called SEEDs for De Pere organized a second major prairie garden planting along the Fox River Trail adjacent to De Pere’s Voyageur Park. The previous one was organized in 2012 by a 16-year old Eagle Scout. 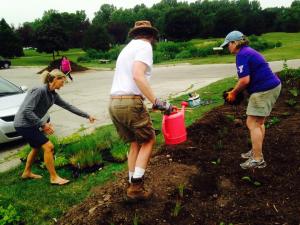 People all over the Green Bay area are restoring our natural heritage. I’m honestly amazed at how many people have bought into the idea of creating habitat in their yards, places of business, and public spaces. I will be launching a website for the Green Bay Pollinator Corridor and featuring local stories about habitat restoration projects in Northeastern Wisconsin.