Amnesia Rockfest continues today in Montebello, but here I sit an hour West at an art gallery in Ottawa. I am sad to miss Anti-flag and Ignite, (OK and Motley Crüe), but I have put my body through a little too much this week. The pits during 88FL, H2O, Strife, and Earth Crisis were fun as Hell, but I took a few lumps. The walking and standing all day may have been great for my heart, but my dogs are barking. And my throat and lungs are burning from way too much pot smoke.

i had a blast for a lot of the time.

I just got to Face Time with my wife and boys. I am happy I joined the cult of the iPhone.

OK, so the quick and dirty from Day 1

I enjoyed Guttermouth. They may be absolute jerks, but they really brought it.

88 Fingers Louie has a lot more fans in Canada than I would’ve expected. They brought it as well.

NOFX seemed disinterested. Fat Mike said it was their second trip to Quebec and it would probably be their last. They were funny and put on a decent show to a huge crowd, but Mike really didn’t seem like he wanted to be there.

a French band called Tagada Jones was my first major surprise of the day. The French Canadian crowd loved them, for good reason. I’d like to pick up some of their stuff. Reminded me a of a French Anti-Flag.

It was a super cool privilege to see Fishbone. 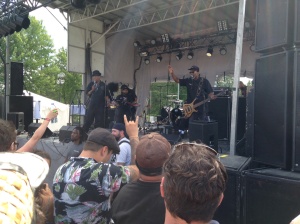 I rested during MXPX. I’ve never really gotten into them.

Loved seeing H20 again. They fed me the time they came to Green Bay. I owe them some snacks.  In my defense, I was a teenager and didn’t realize how lame it was to take food from a touring band. I think one of the members was Krishna and I had on some beads so we started chatting about that.

Met two xdadsx from Montreal whom I hope to interview. Nick and Patrick.

Cannibal Corpse= a lot of hair twirling in harmony.

Strife absolutely stole the show. Here’s Rick in the pit. Looking scarier than ever. He got really bloody after this. 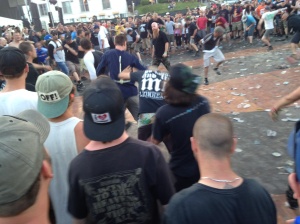 Earth Crisis was fantastic, as always. Haven’t seen them since a 2000 show in Minneapolis. It was great when Karl came down to the crowd for Firestorm. Barricades suck during a hardcore show (as Mike Judge mentioned several times). I took a horrible metal face selfie with Dennis. He’s a cool guy and in many ways an inspiration for this website. More on that in the future.