My last trip to Canada (not including accidental border crossings via canoe in the BWCWA) was on Canada Day, 1999. I drove a carload full of college students. We were all studying at Wolf Ridge Environmental Learning Center near Finland, MN. I was the youngest and the designated driver. Everyone else wanted to drink. We toured the bustling burg of Thunder Bay, Ontario. I gotta say, it wasn’t anything like what July 4th is in the states. Aside from signs reporting that July 1st was Canada Day, there were no explosive signs of patriot love for the true north.

Anyway, I do remember the border guard being quite pretty and very nice. She gave us little Canadian flags. 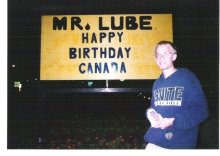 My experience at the border this time was slightly different. I was wearing similar clothing- hardcore band outerwear, cargo pants, and beat up Saucony running shoes. Not sure what this says about my style. I guess it doesn’t change that much. Nor does my favorite road trip food. Corn nuts. Nothing beats corn nuts.

But, this time, I was traveling alone with no intent to meet up with anyone, except as I told the border guards, “I’ll probably meet up with some of the guys in the bands.” I also had several new visible tattoos and a shaved head. I think I looked like trouble. I had to park the car so they could inspect it. They asked me a lot of questions, which I did my best to answer. They rolled their eyes when I gave them too little information. And when I thought I wasn’t saying enough and tried to expound on my answers, one asked, “I’m sorry. Are my questions annoying you?” Um… “No, ma’am.”

Getting back into the States was slightly less cumbersome, but the lady in the booth asked her fair share of questions to me. 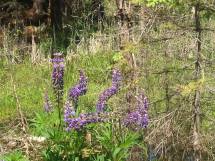 Other than the cold shoulder at the border (which, hey, I admit- I did look like trouble) I had a great time interacting with the people and environs of the great white north. Instead of being strewn with plastic bags and trucker bombs, the Trans-Canada highway was littered with blooming wild blue lupines and cool “Night Danger” warning signs with profiles of a galloping moose. I spent four straight nights sleeping in my car, which my old bones did not appreciate. But, with good travel food, beautiful sights, and fresh air, most of my senses were rather pleased with my time in Ontario and Quebec.

I think it’s cool that the majority of Canadians I met were bilingual, and that everything was posted in English and French. I suppose we’ll get there at some point in the US with Spanish. (In fact, as colonial languages go, Spanish and French have as much claim as English does to being an “original” American language). I’d like my boys to grow up speaking several languages. I’ve dabbled in Spanish, German, French, Swahili, and a few others when I’ve been traveling. But, fluent I am not. It’s going to be hard to raise multilingual kids when neither my wife nor I are well-versed in anything but English.

The school at which I just started working will have Spanish-language instruction. But, it’s a rarity for our city. I’m hoping that by the time my boys are in school, they’ll have that option available wherever they go. 7 years of studying German helped me understand English much better. Learning pieces of all the other languages helped me get around in places and made me feel just a little more connected to the locals. Language is powerful that way. But, maybe not powerful enough to overcome suspicions of a scruffy-looking loner trying to cross an international border.