Teachers generally agree that any school week preceding a long break is much rowdier than other weeks of the school year. This school year, the week of December 19, 2016 was one of those wild and wooly weeks. Perhaps it was being stuck indoors for recess for several days in a row due to sub-zero (Fahrenheit) temperatures. Perhaps it was the advent of a full moon. But, the biggest complicating factor was undoubtedly the upcoming winter recess. Christmas vacation was on the mind of many students and staff members. Stressors- concerns over finances, worries about the health and behavior of loved ones, preparing for family gatherings and long-range trips weighed heavily on a lot of kids and adults. But, people all over school were also buzzing with anticipation- excitement over presents, play time, and much needed R and R.

Often, this is the wildest week of the school year. So, I tried a few different things this year to see if they would help.

First and foremost, I called in a regiment of volunteers. I don’t know if I’ve ever had quite so many extra hands in the classroom as I did the week before break. I can’t overstate how much of a difference this made. 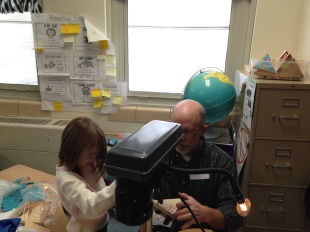 My father, Ed Dorff, helping out on the drill press. We made about 50 triangle peg puzzles during the week.

One of the reasons the additional adults made such a difference is because I planned several hands-on building and artistic activities. We painted on paper and wood using brushes and straws, we built meditation stools and cube chairs, we used the drill press to create triangle peg puzzles, and somehow we still fit in our daily vocabulary lessons, reading, and math time, which itself includes a lot of hands-on STEAM activities. If I hadn’t had the extra hands on deck, things would have fallen pretty flat.

Another thing we did- and often at the prompting of some of my students- was spend some extra time meditating after transitions. From transitioning into the classroom at the start of the day, to coming back in after lunch or recess, we spent 2 minutes of silence just sitting and breathing. I am grateful to the students for urging me to keep up on this practice, as I sometimes let it slide. 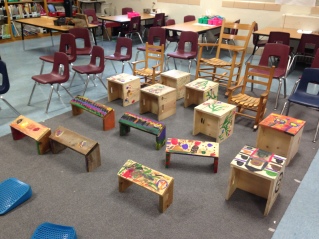 Some of the furniture we’ve built. The things that look like small benches are based on Japanese seiza bench, which are great for meditation. The boxlike seats are often referred to as cube chairs.

Rather than “taking up” class time, these two minutes at the start of classes helped me save time. Meditation saved time by quelling a sense of anxiety and reducing interpersonal conflicts. It saved time by helping us get focused and ready to try the tasks at hand. It made us more efficient and allowed us to experience more joy during our time together.

I’ll be honest- there are many days where I feel wiped out and a little grouchy by dismissal time. And, I would have fully expected the week before break to provide me five solid days of this Grinchlike state. But, I can’t remember another time when I’ve actually felt so energized and joyful throughout the course of each school day.

Here are some of the fantastic people who made the craziest week my favorite week of the year: 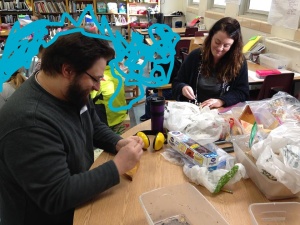 Kristy Aoki, mom, UWGB Student Services Coordinator, who taught us about life in Japan and the Sakura Hanami. 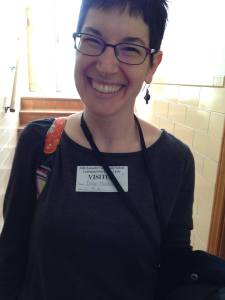